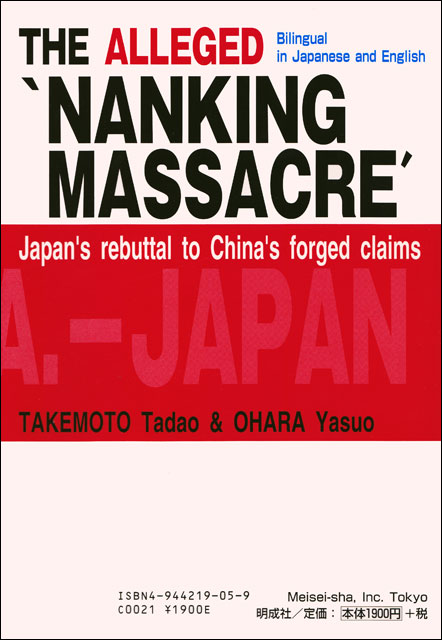 ■Give evidence that no one among westerners who lived in Nanking claimed the murder of 300,000 persons.
■Give evidence that the Japanese Army ordered soldiers to obey the international humanitarian law and not to make unlawful conduct.
■Verify that the burial records presented as an evidence of the large-scale murder were padded.

The China Communist Party (CCP) frequently persists in requesting Japan to show an attitude of the ‘remorse and apology’ for the behavior that Japan took to China in past, citing the ‘Nanking Massacre’ as an example.
As for its intention, there is no doubt that the CCP aims at withdrawal of the ‘compensation and financial assistance’ and the ‘concession’ from Japan as analyzed by the Library and Congress, Congressional Research Service.
At the same time, in order for the CCP to establish the hegemony in the post Cold War East Asia, the CCP has to drive a wedge into the Japan-U.S. alliance, which is an obstacle on the road to its hegemony. Therefore it may say that as one of measures to accomplish this, the CCP intends to have ex-Allied Nations recall the ‘evil act of ex-enemy Japan’ stressing old ties of Allied Nations.
It is obviously telling of the China’s intention that on the background of the sales campaign of The Rape of Nanking, we can catch a glimpse      of the shadow of the CCP through the activities of Chinese-Americans and overseas Chinese merchant organizations in the U.S.
―OHARA Yasuo, Conclusion

The first shot, it’s the first rebuttal to the anti-Japanese campaign being eveloped in the States!

Dedicated to the people all over the world who love the spirit of fair play. For a half century after World War Ⅱ, Japan has kept silent whenever and however we were falsely accused of this problem.
Here, we would like to break the silence for the first time. We will not scream like the Chinese, but set forth our views purely and fairly as an accused standing in the dock of a courthouse,  speaking in a low tone of voice, asking the fair judgment of the readers.
―TAKEMOTO Tadao, Preface

Chapter I  What was the ‘Nanking Massacre’?

1. The Road from Shanghai to Nanking
2. Prosecution of the ‘Nanking Massacre’

Chapter Ⅱ  Re-Examination the Proofs of the Prosecution

1. The number of casualties, 300,000
Argument 1 After the Japanese occupation, did the population of Nanking decrease by more than 300,000?
Argument 2 Did the ‘Chinese postwar investigation’ have probative value and admissibility?
Argument 3 Did westerners witness the massacre?
Argument 4 Were Japanese high officials aware of the massacre?

Chapter Ⅲ  The Proof, which denied some evidences submitted by the Prosecution

1. Photos, movies and witnesses testifying that Nanking was restoring the peace and order
2. Burial Records which denied the massacre
3. False Smythe’s Investigation
4. Incomprehensible attitudes of the KMT